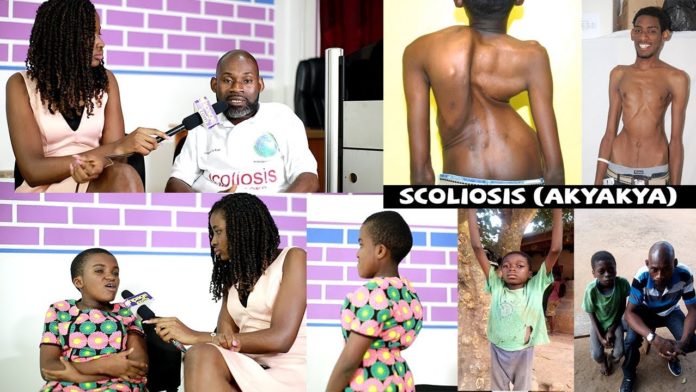 Scoliosis known in the local parlance as Achacha is the abnormal lateral curvature of the spine that occurs most often during the growth spurt just before puberty.

Scoliosis causes the spine to curve to one side. It can affect any part of the spine but the most common regions are at the level of the chest and the lower back.

Causes of scoliosis or Achacha are not known but it mostly appears in children which sometimes requires surgery to correct.

According to research, scoliosis is more common in females than in males and they stand a higher risk of the curve worsening and requiring treatment.

Some signs of scoliosis include uneven shoulders, uneven waist, one hip higher than the other and also one shoulder blade appears more prominent than the other.

Scoliosis also causes complications like lung and heart damage, this is where the rig cage press against the lungs and heart making it more difficult to breathe and harder for the heart to pump.

Another complication involves back problems and adults who had scoliosis as children are more likely to have chronic back pain.

In the interview with the founder and CEO of Scoliosis Foundation Ghana Mr. Gabriel Ntow Quao, he was diagnosed with scoliosis since age 2 and has been living with it for almost 42 years now.

Mr. Gabriel Ntow stated that people with scoliosis are mostly stigmatized and ridiculed due to their condition.

Most people are of the view that scoliosis is infectious but Mr. Gabriel Ntow debunked such claims.

However, the good news is that scoliosis is curable and when detected early can be prevented.

In severe cases, surgery is needed to reduce the curve of the spine and to stop it from getting worse.

Mr. Gabriel Ntow who runs the Scoliosis Foundation appealed for funds to run the organization as it specializes in providing treatment for people with scoliosis.