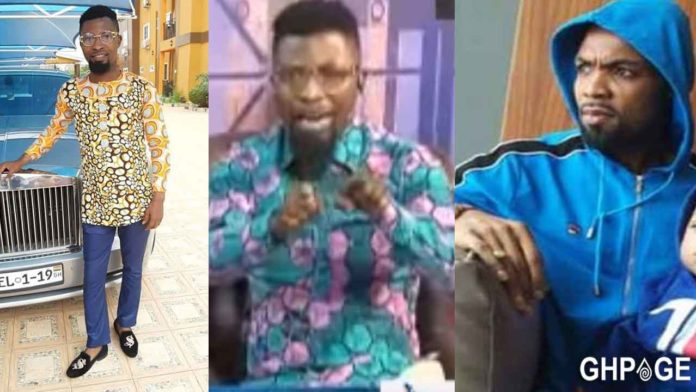 The former junior pastor to the founder and leader of Anointed Palace Chapel(APC) Rev. Obofour known as Kelvin has thrown fresh shots at his former boss calling him an ungrateful being.

Recounting the struggles he went through with Rev. Obofour on his television show, where he revealed that due to the love he had for the former boss he had to leave his father’s newly built house just to sleep in a bush with Rev. Obofour.

According to him, upon all these things he has done, his former boss has remained ungrateful and has never praised him for his sacrifices.

Watch his video below:

Pastor Kelvin stated that he is very grateful for what his new father Angel Obinim has been able to do for him within this short time that he has been with him.

Pastor Kelvin who was the former right-hand man for Rev. Obofour switched camp to Obofour’s rival Angel Obinim some months ago and that led to the current Pastoral beef between the two men of God.

VRA Donates Food Items To The Flood Victims in in the Upper Region.

JUST IN: ECG to release 8-day ‘dumsor’ timetable for parts of Accra from May...