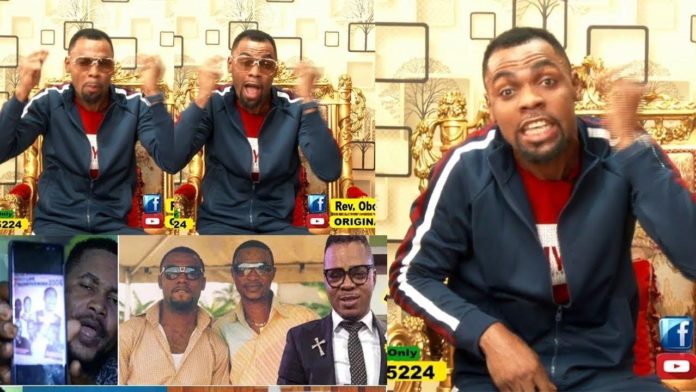 The founder and leader of Anointed Palace Chapel Rev Obofour has descended heavily on pastors who have accused him of being a ritualist.

Rev Obofour described his accusers as fools and animals, adding that he is not in any way scared of anyone.

According to Rev Obofour, some of these pastors who are falsely accusing him do not have anything to preach about and are just tarnishing his image.

Rev Obofour explained that a little boy was brought to his church for deliverance and upon seeing the boy he noticed that his sickness was not spiritual but needed immediate medical attention.

The man of God added that all he did was make sure the little boy received medical attention and cannot fathom why some pastors are describing such his act as a sacrifice.

Rev Obofour further stated that some pastors in Ghana are only amassing wealth from their congregation to enrich themselves whiles some members are in dire need of help.

He further rained insults and used unprintable words on these pastors who are accusing him of using the blood of people he helped for rituals.

Rev Obofour further advised men of God to help their such members financially and stop enriching themselves and their families.

SEE THIS  Soldiers beat the “hell” out of Ada Youth