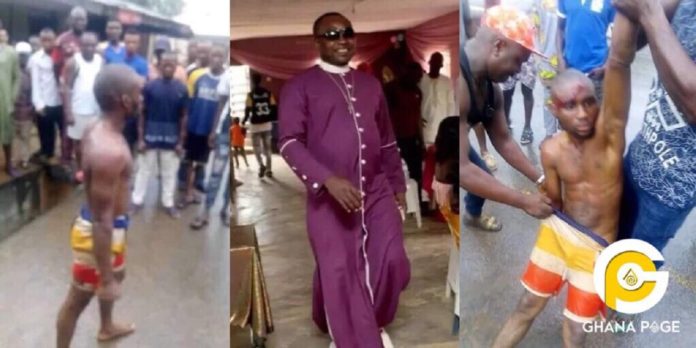 A Nigerian pastor has shared a shocking story about how a thief broke into his house but ended up falling asleep naked.

According to the man of God identified as Ephraim Ononye, he was at church when the robber broke into his house at Obosi area of Nigeria Anambra State.

The man of God shared photos of the robber who was caught sleeping naked at his luxurious home on Facebook and explained how it happened.

He wrote; The thief/Hired killer…..I was doing the work of my father at Power House Assembly ground, Abakaliki chapter on Sunday 27/10/2019…

And the thief/hired killer came to my house in Obosi at night, he succeed in breaking through the front door. Who knows what happened to him when he entered my house?

Just this morning, I started receiving calls from my village people, telling me that a young man, an unknown face was lying down, sleeping in front of my house totally nacked as at 7 am and all his clothes were found inside my building.

I am coming…..Arrengy prophets and deceitful pastors I greet unaoooo
You don’t know how prepared we are. Mteewwwwwww

Well, the thief has been handed over to the authorities for further investigations.

Battle for survival! Man kills leopard with bare hands to save his family

IT’S TIME TO OVER DESPAIR, HOPELESSNESS, AND UNCERTAINTY BORNE OUT COVID 19

Battle for survival! Man kills leopard with bare hands to save...