13-year-old Ovey Friday pictured above has lost both his hands after his stepmother took him to a native doctor and coals of fire were heaped on his tied hands after he was accused of being a wizard.

The stepmother had accused him of sleeping with her in the dream and she needed him to confess and also get the spirit out of him. She took him to her native doctor in Wulko Community, Nasarawa Eggon Local Government Area, Nasarawa State where hot coals were placed on his tied hands. The incident led to a permanent deformity of his right hand while the left hand was amputated at an Abuja hospital yesterday November 14th.

Spokesperson of the Nasarawa State Ministry of Youths, Eche Amos, who shared the news on his Facebook page this morning, said the suspects have been arrested by the Police and will soon be charged to court for ”culpable homicide.

Ovey, whose biological mother is now late, was accused of witchcraft by his step-mother who alleged that the teenager was making love to her in her dreams, an allegation the young boy repeatedly denied.

He was then taken for exorcism where, with the collusion of a native doctor, Ovey’s hands were tied together and coals of fire poured on them to force him to confess to the allegation, yet, he claimed his innocence.

The effect of the burns led to Ovey’s (left) hand’s amputation and permanent deformity on the other(right) as it had degenerated into gangrene.

While Ovey’s father, Friday Dio, an okada rider based in Lagos is yet to surface since this incident happened, all the suspects involved in this abominable act have been arrested by the Police and will soon be charged to court for culpable homicide.

Efforts are underway to fix a prosthetic hand for him.

This is an expensive task, but HUMANITY will always be first!!! 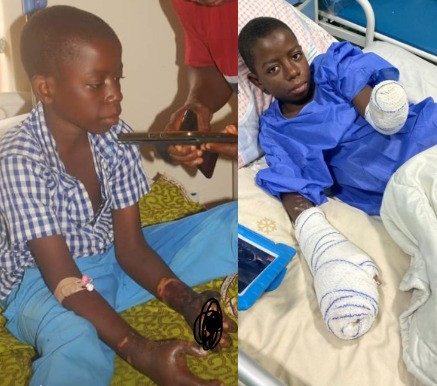