It was alleged that the governor was attacked by the citizens of Congo after it was gathered that he went on a shopping spree in Paris. In a video shot during the incident, the governor could be seen trying to escape from the citizens who mobbed him.

READ ALSO: Reports Claim Cristiano Ronaldo Could Leave Juventus For Manchester United At The End Of The Season

The mob carried the flag of Congo as they attacked and threw items at the man.

A Twitter user identified as @uche_ezeonye shared a video of the incident on his page. He stated that the man went on a shopping spree and he received a beating.

According to @uche_ezeonye, all politicians deserve such treatment especially Nigerian politicians.

That’s not a bad beating afterall. All of them deserve stoning especially Nigerian once.#BeatPolitician 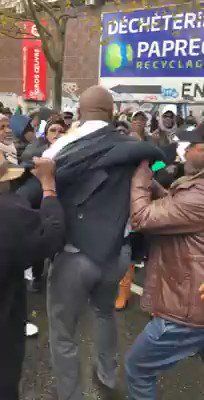 The 7 Men Who Were Harassing 2 ladies In Public Video Trending No.1 (Watch)

JUST IN : FDA Shut-Down COA FS Company As They Recently Claimed It Contaminated.

Small scale farmer shares photos of his hustle & he receives a huge amount...

The 7 Men Who Were Harassing 2 ladies In Public Video...