A woman has been buried inside a coffin which was shaped like an aeroplane in a community in Edo state.

A video has emerged on social media showing the strange funeral ceremony of a woman in Edo state, stunning many residents.

The funeral stunned people because the woman was actually laid to rest inside a coffin shaped like an aeroplane.

According to reports, the incident happened in Benin, the capital city of Edo state and has since gotten tongues wagging in the area. 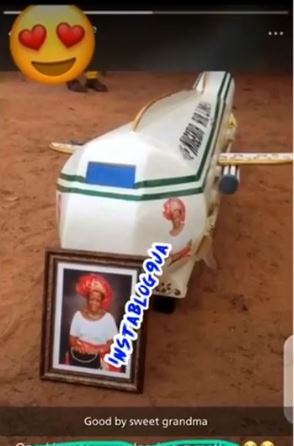 In the video, pall bearers are seen carrying the aeroplane-shaped coffin and dancing to music in the process as observers watch in awe.

The exact reason why the woman was buried in such a unique way has not been confirmed at the time of this report.

Rawlings will be buried in Anlo state-Families to government

Guy breaks up with his girlfriend after they went out &...

“We are prostituting because of the government’s failure to pay us...