Founder and leader of True Word Fire Prophetic Ministries (TWFPM), Prophet Nigel Gaisie has been named among persons who defaulted in the payment of their loans by the Student Loan Trust Foundation (SLTF).

The controversial man of God was captured with student ID 10232543 from the University of Ghana City campus where he took the loan to support his education.

According to documents sighted by MyNewsGh.com, the amount and its accrued interest started from March 23, 2009, and as at November 25, 2019, he was yet to clear himself.

The Student Loan Trust Foundation (SLTF) since last week has been naming and shaming individuals some in high positions who have benefited from the scheme but have failed to settle their indebtedness upon completion of their programs.

Meanwhile, Head of the Public Relations Unit of the SLTF, Mr. George Ferguson Laing has justified the decision by the Fund to publish names of defaulters indicating that it is yielding the needed results.

“We have payments being made. Some too have come to restructure their payments, but we are taking it on a case by case basis. For some people, there is no way you can allow them to restructure their payment, they have to repay everything because it has taken them too long to settle their indebtedness. So far, the response is very encouraging and I pray that we would not take the drastic action of going to court”, he revealed. 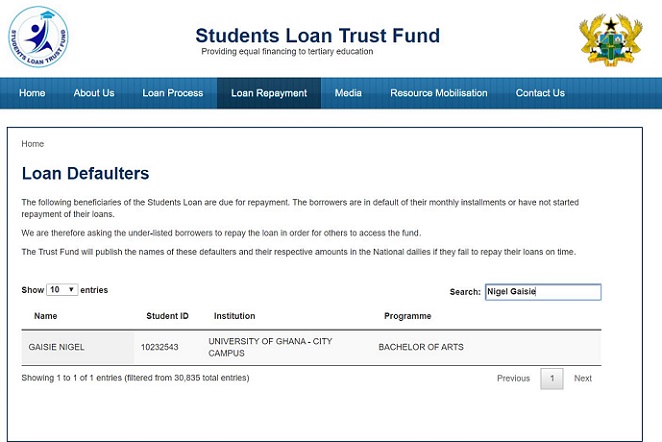 More than 55,000 people owe the Students Loan Trust Fund (SLTF) GH¢75 million, representing default in the repayment of the loans students took to cushion themselves while in school.

Out of the number, about 35,000 have made some form of payment, leaving more than 20,000 who have not paid anything at all, after the two-year grace period for repayment elapsed.

The debt in the names of those who have not paid anything at all stands at GH¢35 million.

With some of the debts dating as far back as 2012 from the first batch of beneficiaries who took the loan in 2006, the fund managers had warned the borrowers that they would begin to publish the names and pictures of the defaulters in the national dailies in the coming weeks.

(+VIDEO) After Taking Her Life, You Still Have The Guts To Tarnish Her Image – Leticia’s Mother And Sister Accuses Her School Of Deliberately...

Corn cob sold at a shopping mall for GHC52