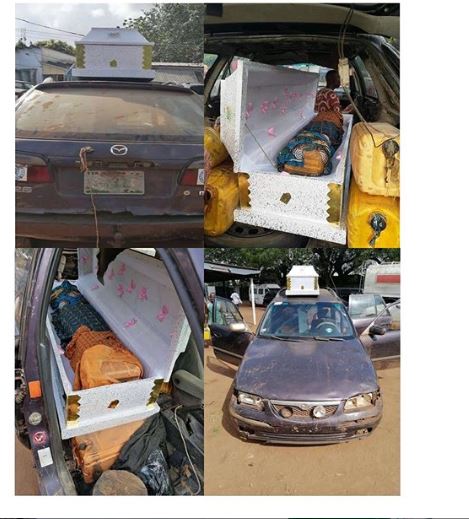 According to Abdullahi Maiwada, Customs Spokesman in the area, the fuel laden coffins were abandoned in a vehicle at Idiroko, the Nigerian-Benin border.

“In continuation of the fight against smuggling, a customs joint special taskforce of Ogun I Command, Federal Operation Unit Zone ‘A’ and CGC’s Strike Force intercepted 13 jerry cans of 25 litres and six jerry cans of 10 litres of PMS concealed clandestinely in two caskets,“ the spokesperson confirmed.

The spokesperson said items were conveyed by a daredevil smuggler with the intention of smuggling the items across the border to a neighbouring country.

The command reiterated its stand on the fight against smuggling in whatever disguise.

Man runs away from hospital bed after Doctor told him that...

Secrets revealed by Iona Reines about Mzbel shows they were ‘lesbobo...