The food a group of people prepare and eat forms part of their culture.

Kenkey is one of the most consumed food in Ghana and it has quite a number of health benefits that have been nutritional for the consumers.

In Ghana, people put in a lot of effort to put together their meals.

Usually, Ghanaians use the ingredients which are prominent in tropical areas. Some of these include corn, beans, millet, plantains, and cassava.

The culinary skills of Ghanaians go beyond just feeding themselves. Their cooking reflects their different beliefs, traditions, and habits.

As such, experiencing and experimenting with local traditional foods provides an education of the culture, too.

One present feature in local Ghanaian food is the use of a variety of leafy vegetables and local herbs and spices. The highly nutritious Kontomire stew is made from boiled tender cocoyam leaves, salted fish and boiled eggs, and goes perfectly with boiled yams, plantains and avocado. 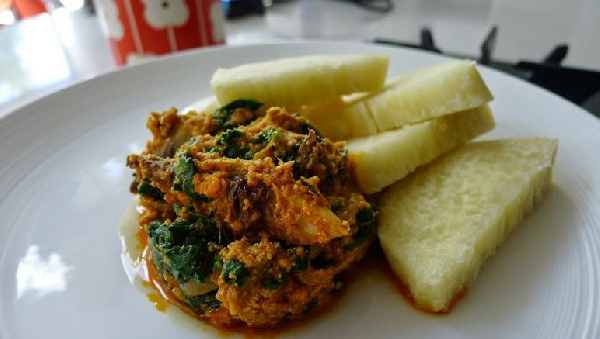 Nkontomire or Kontomire is the name given to Cocoyam leaves or taro in Ghana. Taro which is a source of vitamins A and C is also native to other countries in Africa such as Nigeria (biggest producers in the world), Kenya, Uganda and Tanzania. In Egypt, they are called kolkas and in Europe, it had been used since Roman times.

It, however, is as Ghanaian as Ghana’s Kenkey even though Nigeria and other countries have similar versions of this tasty stew.

Omo Tuo (or rice balls) is another traditional Ghanaian food that shows how the population often reinvents the myriad ways of eating rice.

It is a Ghanaian rice side-dish originating from the Hausa people but is eaten throughout the country. 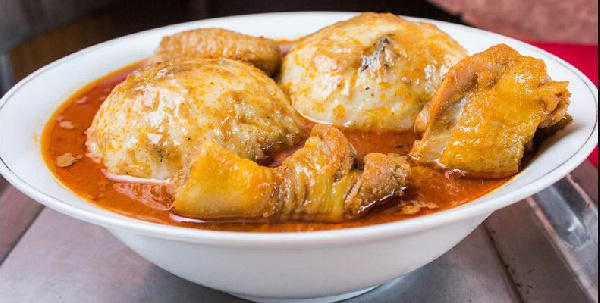 Some describe it as “rice fufu” or simply as rice balls. It is often eaten with groundnut (peanut) soup and can also be eaten with palm nut soup.

In the Northern Hausa-Fulani territories of Nigeria, it is eaten with a baobab leaf and dried okra soup called miyan kuka.

Food has a way of breaking barriers of ethnicity. This is what banku and okro soup do for Ghana. 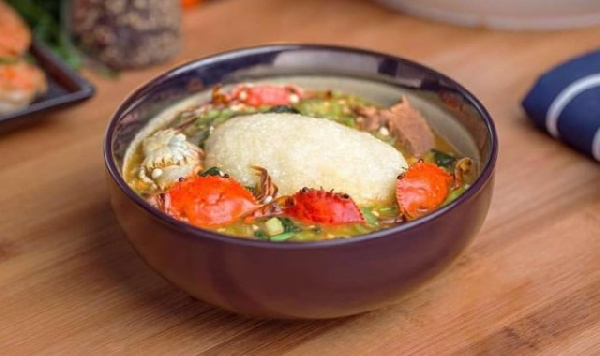 This is one of the signature dishes that everyone in Ghana identifies with. There may be slight variations in how it is made but the basics remain the same.

Ghanaians love their okro stews and soups slimy and with plenty of assorted meat and fish. A favourite in many chop bars (traditional local eateries).

Perhaps the most accessible entry to Ghanaian cuisine for first-timers, red-red is a mild bean stew made from black-eyed peas that’s great for those who shy away from spicy food. 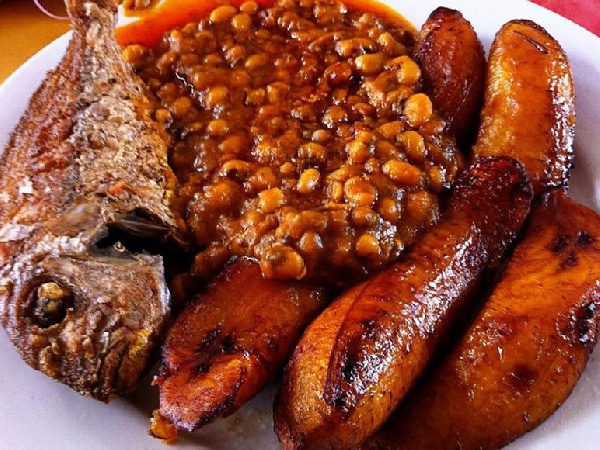 It is usually suitable for vegetarians, though sometimes fish or prawn sauce is included.

The dish gets its name from the colour produced by the red palm oil and tomato paste used in the stew.

And no dish of red-red is complete without a side of sweet fried plantains!

Regardless of its origins, this dish has done more for African unity than any politician could ever dream of. Any abuses committed against it that diminish its authenticity is seen as scandalous and almost sacrilegious. It is not true to say that Jollof rice is the same everywhere. The cooking methods, ingredients used and type of rice (basmati or long-grain) used all vary across Africa. 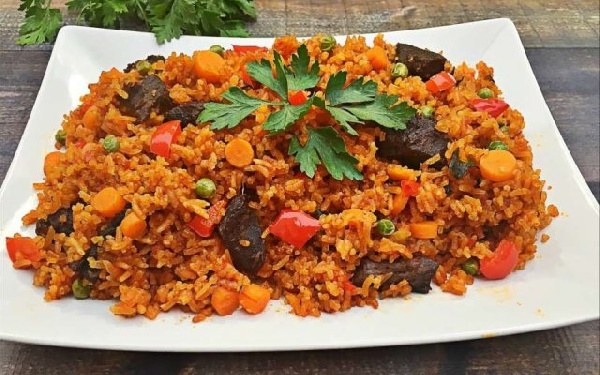 Ghana’s style Jollof rice is one of the most popular. Any uncalled-for twists to their version offends their sensibilities. Fish and other seafood are “absolutely out of the question” as suitable pairings for Ghana Jollof rice. Chicken, beef and lamb, meanwhile, are mandatory – with green peas, diced carrots, sweet corn an “optional extra”.

In Ghana Jollof rice is usually a must in any self-respecting party, marriage engagement or wedding. You’d never go to a typical Ghanaian restaurant anywhere in the world and not find Jollof rice on the menu.

Ghana Jollof is normally served with gravy, shito and fried plantain as aside. 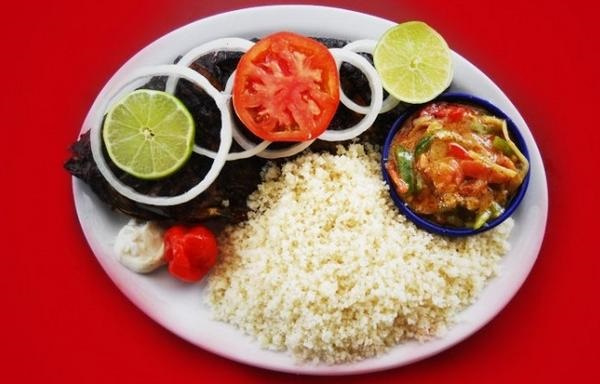 Akyeke is a Ghanaian delicacy which is prepared by people in the western region of Ghana. It is made from grated cassava that is fermented and is flavorful when eaten with fried fish with ground pepper garnished with chopped pepper and onion with a little seasoning for taste added with palm oil to give it a yellowish look and different taste.

One can also eat Akyeke with smoked fish and stew, it can be served with soup as well. 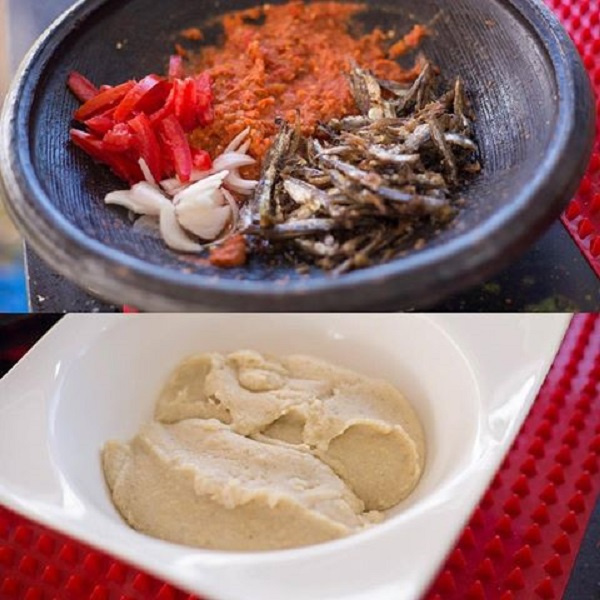 Abobi is the Ewe name for what other Ghanaians popularly call “Keta School Boys”. Abobi is quite different from “One Man Thousand”; the fish used for Abobi Tadzi is a little bigger than One Man Thousand.

Simply, Abobi Tadzi is fish tomato sauce. It goes best with fresh, hot Akple. The Volta Region has so much to teach Ghanaian food enthusiasts.

What comes to mind when you hear of breakfast is oatmeal, milo, tom brown, Lipton accompanied with sandwich, crumbed eggs, bread and fried eggs among others. But those of you who have stuck to the good old Hausa Koko and Koose know nothing can be compared to it. 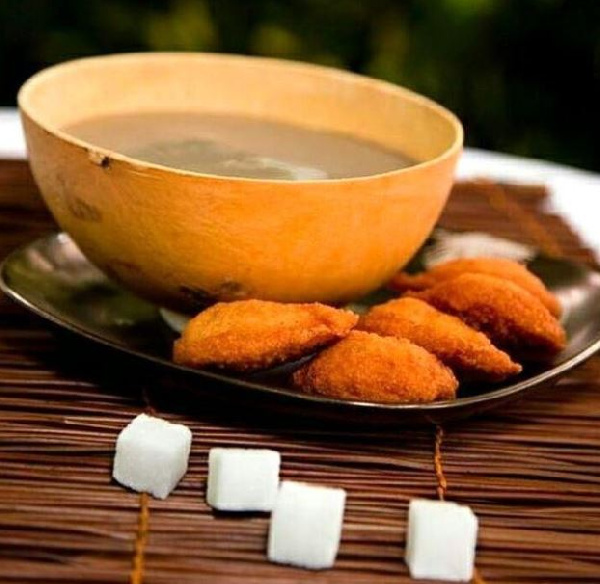 This breakfast is even recommended by doctors for recuperating patients are usually served with Hausa Koko and Koose which is easy to drink and digest.

If you want to live a little healthier, you can’t go wrong with switching to recipes with healthier ingredients. If you like making your own food, it means you’d want to switch to healthier ingredients. Unfortunately, there are times when your options are limited and very similar to each other, like when picking poultry meat. 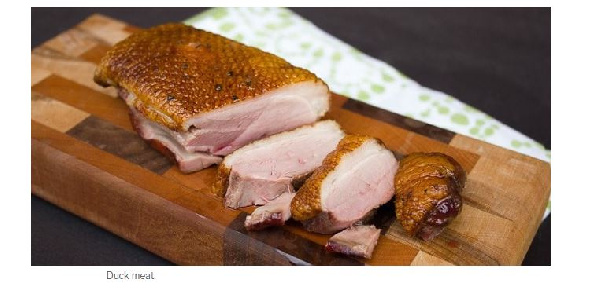 There are two popular poultry meat options: chicken and duck. It’s easy to find either kind of meat in supermarkets so availability shouldn’t be an issue. Also, most recipes that use chicken meat work well with duck meat.

Duck isn’t as popular as chicken, but that’s not really saying much. You’re still likely to get duck at your nearest superstore.

Duck meat is considered to be fairly nutritious, with a variety of vitamins, minerals, antioxidants and other nutrients. The most nutritious aspect of duck is its protein, at a total of 23 percent of the daily value (DV) per 100 grams (3.5 ounces).

Ice kenkey is popularly called “mashké” meaning mashed kenkey. On a typical hot afternoon, one local beverage that cannot be rejected is chilled mashed kenkey mixed with milk and some groundnuts.

To quench the thirst or even kill the hunger under the scorching sun, a bottle or cup of chilled mashed kenkey is what most people would need.

Like other beverages made in Ghana, such as Burkina, Fula and sobolo, ‘ice kenkey’ has remained one of Ghana’s finest beverages. 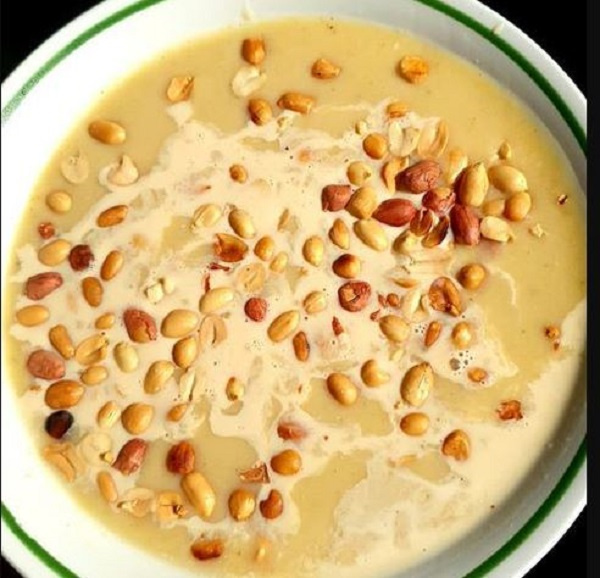 Mostly taken with bread or any pastry, it is served on the street and at events such as engagements, funerals and sports activities.

Made from Fante and Ga kenkey, which are made of maize, with the sweet flavour from milk and sugar, ‘ice kenkey’ has gone from just being consumed as a beverage to food that satisfies the hunger pangs in the stomach of many people.

The uniqueness of the drink is that it is locally produced and has essential nutritional values.