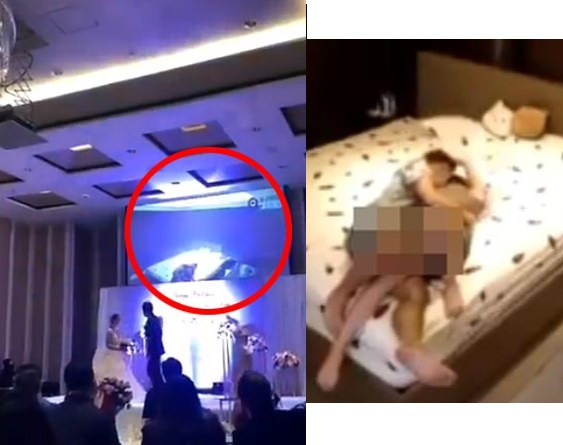 A wedding between a Chinese man and his partner ended at the venue after the groom played a naked video of the bride having sex with her brother-in-law in front of shocked guests.

The wedding reportedly took place in the province of Fujian in south-eastern China last Thursday.

According to online reports, the five-minute sex tape was played at the event in front of family and friends to humiliate the unfaithful fiancée after her affair with her pregnant sister’s husband was discovered.

In the viral video, the emcee is heard telling the crowd ‘now we are going to show you the videos of how the newlyweds grew up’. But seconds later, an X-rated video starts playing from the projector.

The clip then shows the groom accusing the bride on stage ‘you thought I didn’t know?’ and the bride throwing her bouquet at her partner before people ran to the stage to separate them.

An influential Chinese entertainment blogger known as ‘Jiang Zhe Hu Ba Jie’, claimed that the bride cheated on her fiancé after suffering from domestic violence from him and she also admitted the affair.

He also added that the bride and her brother-in-law developed feelings for each other after the latter started to intervene between her and her fiancé during their dispute over domestic violence.