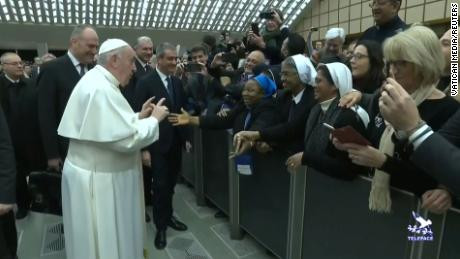 Pope Francis, the leader of the Roman Catholic church is in the news again, just a week after he was filmed slapping the hands of a woman who grabbed his hands.

The pontiff kissed a nun on the cheek, after jokingly asking her if she won’t bite him, seemingly in reference to the incident where his hand was grabbed by a supposed fan last week. (If you missed that story read HERE)

Walking through a large hall on Wednesday before his weekly General Audience, a nun gestured to the pope asking for a kiss, “A kiss, Pope!” She said.

The pope responded with a joke, replying: “You bite!” Calm yourself i’ll give you a kiss’

Francis then said “Promise you won’t bite?,”
The nun nodded affirmatively and the pope then kissed her on the cheek.