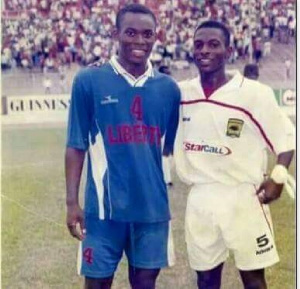 Michael Essien (in blue) played for Liberty in 98

The Ghana Premier League, Division One League and other club competitions in the country have always provided a platform for footballers to showcase their talent and establish themselves as world-class footballers.

While some have made the name playing in these competitions and used it to secure bumper deals abroad, others also flee from the local scene after a relatively short stint and made it big with clubs in Europe.

Today, ghanaweb.com brings you five players who left the shores of Ghana unknown but made a big impact with their foreign clubs.

Essien is known for his time at Chelsea where he played 168 games between 2005 and 2014, scoring seventeen goals.

The ‘Bison’ was a member of an exceptionally gifted generation of Chelsea players who won laurels for the club and made it the big club it is now.

A little is said about his spell with Lyon where he caught the eye of former Chelsea coach Jose Mourinho.

But before the journey to Bastia and Lyon, Essien played for Dansoman-based Liberty Professionals.

Essien was part of a group of talented footballers who were camped and honed by the late Alhaji Sly Tetteh.

Another product of well-run Liberty organization, Kwadwo is still fondly remembered by most of the people who witnessed his incredible talent at the very early stage.

Most describe him as a determined and shy boy who was just interested in playing football.

But this part of Kwadwo Asamoah’s success story is unknown to many Ghanaians who only got interested in the midfielder after his performance for Ghana at the 2008 AFCON.

Amoah wasn’t a media guy. He was just interested in playing his game and there is little you will read about him off the pitch.

In the Dutch Eredivisie, Amoah’s goals and service to NAC Breda have made him a legend at the club but in Ghana football, Matthew Amoah is only remembered for what he did for the Black Stars.

He left the club at the very age of 16 to join Vitesse Arnhem. His career took an upward turn from there and went on to play 332 club games.

Bechem United has a great history of producing fine goal scorers and Boakye-Yiadom is an example of the good job being done by Kingsley Owusu-Achiaw and his cohorts. He spent three years at Bechem United before moving to local side DC United where he spotted by scouts of Genoa after impressing in a youth tournament in 2008.

But his rise to the top would not have been possible had it not been the shrewdness of Alhaji Sly Tetteh.

Sulley and Essien’s bromance at the Black Stars started from their early career days at Liberty Professionals.

The duo were two of many soccer stars the late football administrative icon unearthed and gifted to Ghana.

We won’t pay you now – Gov’t to customers of Gold Coast, AllTime, other...