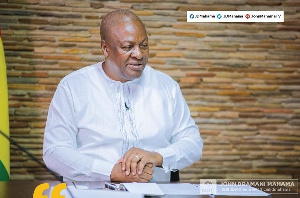 A United States of America Court document has revealed gory details about how the National Democratic Congress (NDC) government under Prof. Mills and Mahama took bribes and allowed European aircraft manufacturer, Airbus SE, to supply the Ghana Armed Forces with uncertified aircraft that can best be described as ‘Kokompe’ planes.

According to the US Court which is enforcing a judgement against top executives of Airbus, the aircraft sold to Ghana was without International Traffic in Arms Regulations (ITAR) and there was evidence of bribes paid to a top elected official.

ITAR is a US regulatory regime that restricts and controls the export of defence and military-related technologies to safeguard US national security and further US foreign policy objectives.

Already, the explosive bribery scandal has become a subject of international news where Airbus has been fined a record £3 billion in penalties by the courts in England after admitting it had paid huge bribes on an “endemic” basis to land contracts in 20 countries, including Ghana, and the US Court is following suit to ensure those involved are punished.

UK’s Serious Fraud Office (SFO) in documents sent to court quoted at least 5 million Euros as payment of kickbacks to a top Ghanaian official through an intermediary who is a close relative of “a high ranking elected Ghanaian government official” during the Mahama administration.

No wonder one of the aircraft — CASA C295 — sold to Ghana by Airbus SE without any due diligence overran the apron during a routine engine run recently.

The NDC members do not deny the deals but are now pushing in an argument that Ghana did not lose any money in the deal.

The US Court document is making it clear that the Airbus SE officials paid bribes in the form of political contributions and supplied the Ghana Armed Forces with rickety aircraft known in local parlance as ‘Kokompe’ planes.

Immediately the documents surfaced in the media from London, Marietta Brew Appiah-Opong, then Attorney-General under Mr. Mahama, issued a press statement on Sunday claiming that officials of Airbus SE did not pay or attempted to pay millions of dollars in bribes in exchange for contracts.

She had said, “Our attention has been drawn to media reports about a Deferred Prosecution Agreement (DPA) entered between Airbus SE and the United Kingdom Serious Fraud Office in respect of the practice of Airbus SE in paying commission to its agents and the use of those commissions.”

She added, “The reports alleging that Airbus SE paid bribes during the administration of President John Evans Atta Mills and John Dramani Mahama are false, misleading and do not reflect the Approved Judgment. Indeed, the Approved Judgment of the Crown Court of Southwark approving the DPA between Airbus and the UK Serious Fraud Office does not allege that any payment was made by Airbus to any Ghanaian government official.”

“It is, therefore, a gross distortion for the media to conclude that officials of the Ghana government between 2009 and 2015 were bribed or paid any commissions by Airbus for the acquisition of the Casa C-295 aircraft,” she added.

However, some legal commentators have rubbished the former Attorney-General’s claims and said the Airbus findings claim specific persons were involved in the criminal scheme and only those involved can legitimately speak to the charges and not Mrs. Appiah-Opong.

Others were also of the opinion that the elected government official named in the UK SFO documents and the Intermediaries involved in the criminal enterprise and the Spanish company are the individuals and entities whose identities are needed in the time being.

The US Court in the case titled United States of America versus Airbus SE as defendant with Case No.: 1:20-cr-00021 (TFH) after investigating the matter has come out with some mind-blowing evidence in its deferred prosecution agreement it has just entered with Airbus SE.

Between pages 66 and 70 of the 104-page document, the US Court took its time to explain how Airbus gurus in connivance with a top NDC elected government official supplied Ghana with aircraft in clear contravention of air travel regulations.

“Airbus completed two campaigns to sell C-295 aircraft to the Republic of Ghana in 2009 and 2015, resulting in the sale of three C-295s during this period, two of which were the subject of false ITAR Part 130 certifications and for one of which there was no application filed because the re-export did not meet the requirements of ITAR Part 130. Several Airbus senior executives from Airbus Defence & Space were directly involved in the Ghana sales campaign.”

The court said, “The first contract between Airbus and Ghana was signed on August 3, 2011 selling two C-295s. Airbus delivered the two aircraft on November 17, 2011, and March 19, 2012, respectively. Airbus filed ITAR licence applications with the DDTC for the transfer of the defence articles in these two C-295s to Ghana under licence numbers GC 2715-11 (approved November 30, 2011) and GC 2020-12 (approved August 30, 2012). In those licence applications, Airbus stated that the transaction met the requirements of 22 C.F.R. § 130.2 and asserted that Airbus and its Vendors had not paid, offered, or agreed to pay political contributions, fees, or commissions in connection with the sale. The applications were signed by export compliance management (Airbus Export Compliance Employee 2) at the Defence & Space Division’s Spanish subsidiary.”

The court said, “In fact, Airbus or its Vendors had paid, offered, or agreed to pay political contributions, fees, or commissions in connection with these sales in the amount of at least 3,596,523 Euros.

“Between 2009 and 2916, Individual 1, a citizen of Ghana, was a high ranking elected government official in Ghana during the relevant ITAR time period. Beginning in or around 2009, a few months after Individual 1 took office, Individual 1 was in direct and repeated contact with senior Airbus executives from both the Defence & Space Division and SMO International about Airbus sales campaigns.”

“Individual 1 was influential in having the Government of Ghana approve aircraft purchases and Individual 1 contacted Airbus senior executives during the government approval process. In 2011, during Individual 1’s time in office, the Ghanaian Parliament approved the purchase of two C-295 aircraft,” it added.

“In connection with the sales to Ghana, beginning on or about January 1, 2009, the Defence & Space Division’s Spanish subsidiary contracted with Individual 1 ‘s brother, Consultant 4, a citizen of Ghana and the United Kingdom, to act as a third-party consultant for Airbus during the C-295 sales campaigns. Airbus purposefully sought to engage Consultant 4 due to his closeness to Individual 1, and Airbus management included consultant 4 in their communications with Individual 1. Airbus used Consultant 4 as a conduit for messages intended for Individual 1.”

The court said, “Consultant 4 traded on his access to Individual 1. Consultant 5, a citizen of the United Kingdom, worked in conjunction with Consultant 4 to assist in the sale. Consultant 4 and Consultant 5 initially were engaged by Airbus without any written business partner agreement and without Airbus completing due diligence.

“Airbus initially agreed to pay Consultant 4 through a company owned by Consultant 4 and Consultant 5, in excess of 3,500,000 Euros for the Ghana C-295 sales campaign.

It further said, “Airbus used Organization 1 solely as a pass-through entity to obscure the involvement and payment of Consultant 4 in sales transactions; Organization 1 did not undertake any third-party business partner activity in Ghana in connection with the 2011 campaign to sell two C-295 aircraft to the Government of Ghana.”

Under the scheme, the court said on March 20, 2012, Airbus entered into a contract with Organization 1 to provide business partner services on the C-295 Ghana campaign and although the agreement was signed it stated that the effective date for the contract was January I, 2010 by Airbus Defence & Space management.

The court found out that the operational address under the agreement was in Ghana, despite the fact that Organization 1 was operating in Spain and the success fee was calculated to be approximately 3,001,718, Euros, a similar amount to that previously promised to Consultant 4 (3,500,000 Euros).

It said pursuant to the agreement, between March 2012 and February 2014, Airbus paid in excess of 3,500,000 Euros to Organization 1 in Spain and the payments were authorized by SMO International.

The court also said after the payment, Organization 1 transferred money to the account of the company owned by Consultant 4 and Consultant 5 and at the same time took a percentage of the money prior to the transfer.

The court said that in February 2014, Airbus management at SMO International and the Defence & Space Division sought to extend Airbus’s contract with Organization I, related to a subsequent campaign to sell C-295 aircraft to Ghana but Airbus’s compliance staff rejected the extension request and required that a new contract be signed.

Consultant 4 subsequently demanded from both Airbus and Organization 1 payment of 1,675,000 Euros in connection with the 2015 C-295 sale.

Additionally, on or about March 28, 2012, Airbus made political contributions in the amount of 62,200 Euros to a Spanish foundation related to agricultural development in Ghana.

This contribution was not initially disclosed on GC 271S-11 or GC 2020-12. Airbus subsequently disclosed the same to the State Department out of abundance of caution, as no direct link between these political contributions and the relevant C-295 sales has been identified to date.

Some recovered victims of coronavirus having erectile dysfunction – GMA