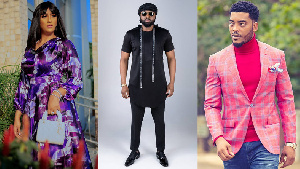 Listen to the Article

Elikem Kumordzie has attracted the wrath of Ghanaian actors after advising his colleagues to go and find day jobs.

Elikem in reaction to Kofi Adjorlolo’s outburst that some Ghanaian movie producers don’t pay, said “I agree one hundred per cent that producers don’t pay … being in that position made me realize this other talent mine” He added that “This goes to all other actors, you can’t wanna do entertainment and not have a day job”.

James Gardiner wrote: “Bro I’m happy you have a day job and business is booming! You are an amazing tailor! But if we keep posting videos like this, we create a trending impression that acting is a part-time job. We both know it’s not. Even in Hollywood artistes get underpaid and taken advantage of. Someone could equally say tailoring is a part-time job. Acting along with every other job can be very lucrative if you have your bolts screwed on tight and thus, requires respect, professionalism and dedication.”

He continued that “I don’t think you should praise those producers for their unprofessionalism, rather you should criticize them. They may have pushed you to take your other job more seriously but you could have started it anyway. Despite and other big businessmen and women don’t start other businesses because their other jobs didn’t pay on time or didn’t pay at all. We should teach the upcoming actors that it’s best when you don’t put all your eggs in one basket. But for all businesses to be successful, you need to respect it to thrive! I have other jobs too but I don’t see them as part-time.”

Juliet Ibrahim who also reacted to Elikem’s statement with a long essay asked him how he will feel if someone asks him to also stop tailoring and find another day job.

She wrote: “So you’re saying an actor should stop acting if that’s the only job an actor knows best???! What if u were asked to stop tailoring and find another day job how would you feel my brother? Acting is a full-time job that pays people’s bills all over the world. An actor shouldn’t have to find another job if the proper structures are in place in his country movie industry. Unfortunately, that’s not the case in Ghana. Hence your advise should be; actors please find other jobs to do while acting because producers don’t value the worth of actors in Ghana yet; so till then, actors should have other means and sources of income.”

The mother of one added that “God help us all in this industry. But until a producer owes u money you well deserve; u won’t be here saying this at all. Till date, some Gh producers haven’t paid people’s balance or Full acting fee or crew members fees and it’s not a joking matter! Let’s stop mocking our own and get serious so that we the actors and industry can also be taken serious.”