Artiste manager, Lawrence Nana Asiamah-Hanson, popularly known as Bulldog has been on the bad side of Ghanaian women over his recent comments which critics say sought to denigrate women.

Bulldog in an interview on 3FM, said women are better off in the kitchen and bedroom only.

According to him, gender equality can never be achieved because God didn’t create men and women on the same day.

The artiste manager reiterated that women in their efforts to compete with men only “destroy stuff and mess up everything.”

After several backlashes, an unrepentant Bulldog says he sees nothing wrong with his statement that women are better off in the kitchen and bedroom only.

“I repeat, that’s where they were meant to be. I don’t have a problem if a woman wants to aspire to be greater, to be president…but a woman is supposed to in the bedroom to massage and have a cozy talk with her husband in the bedroom…I don’t see how I have insulted them,” he said on Okay FM.

READ ALSO: I won’t apologise for my ‘women are meant for bedroom, kitchen’ comment – Bulldog insists

Obviously not enthused by Bulldog’s comment, social media influencer Efia Odo in reacting to Bulldog’s statement tasked him to refer to his wife and daughters.

“Next time he should say his woman and female children. More parents especially fathers should enforce independency unto their children. Women are aspiring to be more than chefs and babysitters.” 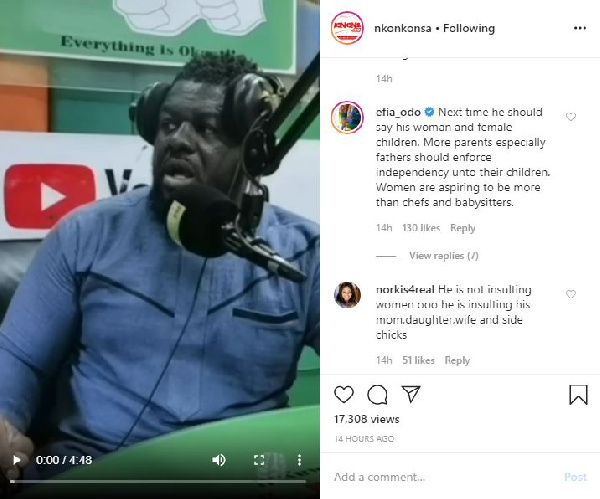 I had no idea Mr Eazi was dissing K.K Fosu on my ‘Dondo’ song – Kwaw Kese