‘I be 16 years’ hitmaker, Mzbel has resurrected her hitherto dead beef with Ghanaian Prophet Nigel Gaisie describing the latter as ‘foolish filthy boy’.

The musician, who took to her social media platform on Sunday, February 9, 2020, to descend on the leader of the Prophetic Hill Chapel served a one-week ultimatum to Propet Nigel to either pay an agreed compensation or she goes public with their ‘secret’ problem.

“Nigel seriously by the end of next week if I don’t get the compensation we all agreed on at the last meeting with your people, I swear on my ancestors, I will proceed with my legal action and the whole world will get to know with total evidence why you’ve been asked to compensate me! Foolish filthy boy!”

GhanaWeb also noticed that Mzbel released curses on critics who will jump on the issue to attack her.

“And oh if anyone dare come to insult me under this post in the name of politics or whatsoever, may the Gods of every feminine river on this land deal with u! May u suffer the same fate Nigel has put me and many others through!!!!

Though the cause of the beef is publicly unknown, some of her fans have called out Mzbel to publicly shame the prophet rather than focusing on retrieving her money.

Mzbel in responding to this call explained that she is only interested in taking her money because, Ghanaians don’t care about the truth.

“Yes, I’m interested in my competition cos the world don’t care about the truth!” she said. 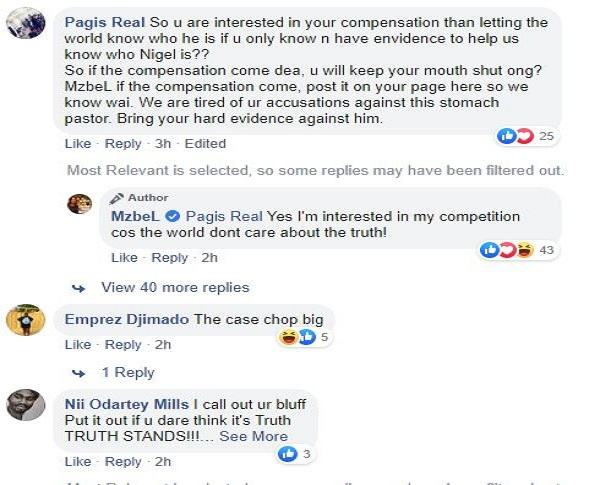 Meanwhile, last month Mzbel, who identifies herself as an NDC member entreated her party to ignore Nigel Gaisie’s 2020 election prophecies.

She revealed that about 70% of the prophecies released by the man of God were plagiarized from Ghanaian Islamic Cleric, Numerologist, and Philosopher Mallam Sham-una Uztaz Jibril.

“My people (NDC & JM) let’s focus on Hard work and Truth and Ignore all these so-called Men of God!! 70% of Nigel’s Gaise Prophecy is from Mallam Sham-Una’s private conversation with a few top people that Nigel knows… and even though the Mallam wanted to wait for a couple of research before putting figures out Nigel revealed the 52.1 % that the man didn’t want to put out yet!!! More filla coming up soon including personal heartbreaking and shocking experience with Nigel Gaise” She said.

Massive fire breaks out in Ajman market in Dubai