A truck-load of police officers who claim to have come from the Accra regional police command and some heavily-built land guards on February 18, 2020 allegedly broke into the houses of tenants at Community 18 and Lashibi, killing a 50-year-old woman in the process.

Davis Aikey one of the affected tenant who told the media that Francis Afotey Okley and Jonas Alfred Carbo accompanied by the police and the land guards said the land at the center of the litigation belong to their late father and have secured permit from the court to eject all tenants from the land.

He said when he perused the court documents it did not bear their name but rather that of Devtraco Estate and lands Commission.

As a result , Aikey said he told the police and the land guards that they do not have the right to paste the court document on their property but they rebuffed their request and broke into their house , ransacked their rooms and locked it up.

They then went to an adjoining house where the deceased Mrs Ahenakwa resides with her husband.

In their bid to forcefully enter their rooms, misunderstanding and ensued leading to the pushing of madam Selvia Ahenakwa. Shit her head on the cement floor and suffered severe injury to the head.

Her son ,Cliford Ahenakwa pleaded with the police to take his mother in their vehicle to the hospital but they refused.

Cliford Ahenakwa then hired a taxi to convey her mother to the nearby clinic at community 18 Lashibi.

He said her mother died at the hospital. The son of the deceased said some Community 18 police officers later came for the body and deposited at the police hospital in Accra.

Cliford Ahenakwa appealed to the Inspector General of Police to intervene in the matter to help them get justice by arresting all the culprits in the death of his mothers. 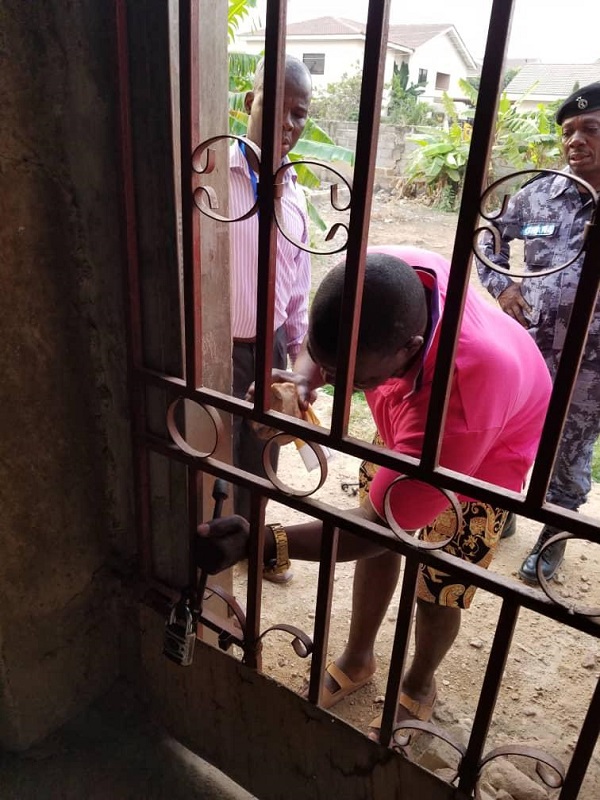 Kenneth Tetteh ,Secretary to the Kwedonu family who said their the owners of the land and backed it with land documents said 2017 court ruling affirm their title to the land.

He has therefore appealed to persons who are living at HFC and Devtraco estate, Cambodia, Collins Duada, Kotobabi, 1&2 and Light Industry area to the family and regularized their stay with the family by end of March 2020.

Mr. Tetteh sympathized tenants who were affected by the barbaric acts perpetrated by the police and the land guard saying they have informed their lawyers to take up the matter in order for affected individuals gets justice.

He appealed to the IGP to use his good office help provide security to the affected tenants because of the incessant harassment by the land guards.

Watch Video::Dangote to buy Arsenal in 2021