Ghanaian top-flight side Great Olympics have offered a trial opportunity to an imprisoned goalkeeper whose talent came to light in a football documentary.

The Accra-based side say they are ready to give Arhin Aboagye to chance to impress their coaches after his amazing shot stopping efforts took the country by storm.

Aboagye was previously unknown in the country but exhibited his impressive goalkeeping abilities during the Prison’s Champion of Champions Cup has now attracted the attention of a top-flight side in the country.

“Bring him to us…we’d love to give him a chance. Such a talented lad,” Olympics wrote on their official Twitter handle in response to the documentary.

The prisoner has already served six of his nine-year sentence and his shown deep remorse for the actions that led to him being caged.

Aboagye narrated how ‘truant and deviant’ behavior derailed his once promising goalkeeping career and has vowed never to return to his unpleasant ways that landed him in jail.

Olympics’ offer is the latest of the several life-changing opportunities Aboagye has had since the documentary aired drawing the attention of Cameroon goalkeeper Andre Onana.

Aboagye named the Ajax goalkeeper Andre Onana as his mentor in the documentary which prompted the Africa’s No.1 stop stopper to send him a signed jersey and gloves.

Thousands in the country and abroad have already launched a campaign to ask for a presidential pardon for the goalkeeper, believing that he could use his talents for sports in Ghana.

The Prison’s Champion of Champions Cup is a season finale to the league organized by the Ghana Prison Service every year.

Bring him to us…we’d love to give him a chance.

Such a talented lad.

A hero behind bars. One of the many interesting stories of our special series on football and reformation at the Nsawam Prison, is that of Arhin Aboagye, a pure goalkeeping talent with an appetite for making big, bold saves. #3Sports 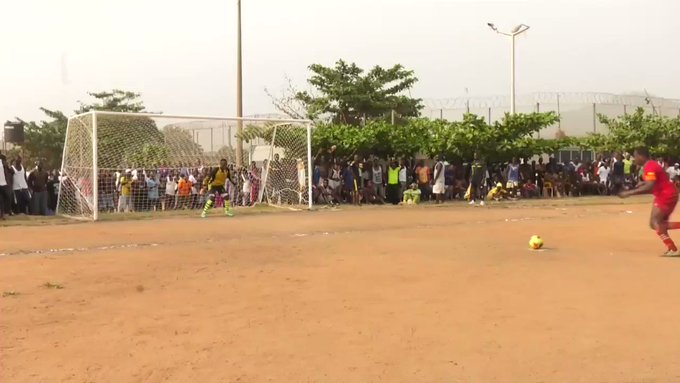 211 people are talking about this
Source: GHANAsoccernet.com

Atletico Madrid’s Diego Simeone named Coach of the Decade ahead of Zidane, Guardiola, Klopp and Mourinho despite winning just one league title