Uber Driver hitmaker, Wendy Shay has responded to highlife artiste Kwaisey Pee’s claims that she lacks the quality and standard he looks out for as a requirement for choosing other artistes for collaborations especially newbies.

It would be recalled that in a recent interview with Zionfelix on his ‘Uncut’ show, Kwaisey Pee claimed that, considering his caliber and knowledge in music, Wendy Shay is not someone he would ever collaborate with on a song, because to him the songstress even though is good in her own rights, lacks the standard and quality he looks out for in his collaborations.

These claims didn’t go down well with the ‘Stevie Wonder’ crooner, and she has replied the veteran highlife artiste in equal measure.

In a post sighted on the musician’s official Instagram page, she expressed disgust at how Kwaisey Pee, just like others, always uses her to revive their dead careers and also to trend. She called him a jealous old man and warned him to respect himself.

She wrote, “If anyone wants to resurrect their dead career, they want to use Wendy Shay to trend, If you want the young to respect you respect them too …Respect is reciprocal..Respect yourself jealous Old Man” 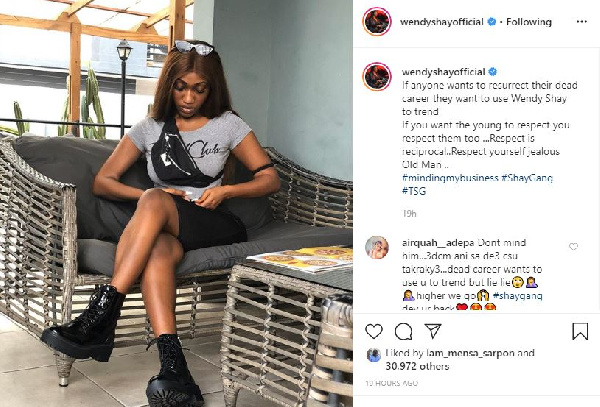