At a very young age, Nii Omanye Otu showed signs of a genius. Before he turned one, his parents saw his unique ability to learn and retain a lot of information.

Signs of a child prodigy include a love for reading, curiosity about the world, early pattern recognition, detailed knowledge and interest in their favourite topic at an early age.

Nii Omanye Otu is Ghanaian whose intellectual development fits in all the signs of a genius. Growing up in Accra, Nii showed signs of interest in a host of topics from geography, mathematics, spelling to astronomy.

The basics of general knowledge was the easiest for the 5-year-old.

Sitting in Pulse Ghana’s studio with a mix of childhood exuberance and readiness for his interview, Nii asks for a pen and paper. Without any direction or instruction from anyone, he starts to scribble down something. 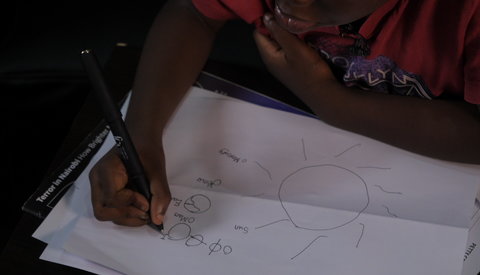 For a 5-year-old, his handwriting and master of his inscriptions was one that showed signs of a gifted child. On the paper was the solar system and he begins to outline a few tasks around the various planets.

“Hello guys, we are learning about our Solar System,” Nii Omanye Otu announces his presence in an interview with TheNewsGh.Com.

“It is made of the sun and the planets that rotate around the sun. Mercury is the first planet from the sun, it is closer to the sun and it is too small.

“Venus is the brightest planet in the Solar System because it has too much carbon dioxide. Now Earth, Earth is the third planet from the sun, it has one moon, the natural satellite.”

His interest in the solar system stems from the idea of wanting to be an astronaut in the future. Throughout the interview, Nii would almost always want to talk more about his favourite topic irrespective of the conversations at hand.

Alfred Nii Yeboah Otu, father of the Ghanaian child prodigy disclosed being an astronaut is something his son has been passionate about in the last year.

“For the past year, he’s been saying he’d become an astronaut, and we have noticed he has so much interest in the solar system and everything about the planets, space, rockets and all those things so we will just keep encouraging him and trying to get him resources as and when he asks,” Mr Yeboah Otu told TheNewsGh.Com

“When we notice resources that will be good for him, we will introduce him to the sites and books and practical stuff that will help him.”

Nii Omanye Oto is passionate about astronomy but his knowledge goes far beyond that. The young Ghanaian has immaculate command over mathematics for the child that he is.

He does quick arithmetic in his mind without literally blinking an eye. What is generally termed ‘mental’ in Ghana is one that Nii does with so much ease.

On basic science for a typical Junior High School student, the KG2 (Kindergarten) pupil makes it all look easy. From definitions around basic science terms, defining formulas and determining units of measurements, the 5-year-old knows it all. This was something his parents noticed at a very young age.

“I got to know of his unique ability to learn and retain as much information as possible very early before he turned one. When he was combining sounds to form words, he was doing it easily and effortlessly,” Nii’s father tells TheNewsGh.Com

“It’s like when he’s learning he doesn’t get tired.”

The KG2 pupil displayed some swagger when it came to general knowledge around places, the continents, countries in Africa, oceans and a host of landmarks which was just impressive for a young kid.

His spelling ability was also a commendable ability as he spelt the longest word in the world with 45 letters ‘PNEUMONOULTRAMICROSCOPICSILICOVOLCANOCONIOSIS’ with the level of authority only a genius could ooze in a room full of adults.

“He is doing well with spelling, I feel if he gets a professional to pay attention to his spelling he can really go far with spelling,” Nii’s father said about his son’s spelling ability.

On languages, Nii is trying to teach himself French. He pulled a few tricks off by saying ‘I am eating an apple’ in French among other things.

“Just like the other subject areas, he’s trying to learn French on his own via Youtube,” his father confirmed.

Although Nii’s gift has so many positives, there are the challenges that the family faces to raising up a young boy of this immense ability.

“I feel like we do not have enough time for him,” Nii’s father talks about the challenge raising him amidst all the other responsibilities he and his partner have to deal with.

Environmental factors with regards to raising Nii in Ghana is also another point Mr Yeboah Otu talked about.

“It is obvious that the western world might have more resources than we do in as much as we are doing our best as a country to catch up,” he continues with his conversation with TheNewsGh.Com

“It is obvious that the Americas and Europe will provide more facilities that would be of help.

“Nevertheless, I also believe that it is about the individual that if you’re meant to be or you have something in you, it doesn’t matter where you find yourself. Once you want to make maximum use of the resources available, you try on your own and improvise to make sure things work. We have the internet so we can do much with the internet available.”

Nii Omanye Otu needs understanding. A chat with him shows a boy with a gift. Learning, knowing and understanding quickly, this is a story that delves into the brain of a young Ghanaian genius.