US President Donald Trump has announced sweeping travel restrictions on 26 European countries in a bid to combat the spread of the coronavirus.

The ban applies to travellers from countries which are members of the Schengen border-free travel area.

The UK, Ireland and other non-Schengen countries are unaffected. Exemptions are also being made for US citizens.

The EU condemned the measures, saying it was taking “strong action” against the virus.

The new rules go into effect on Friday at midnight EDT and mark a major escalation from the US president, who has been accused of inaction over coronavirus.

There are 1,135 confirmed cases of the virus across the US, with 38 deaths so far.

What else did the US president say?

“This is the most aggressive and comprehensive effort to confront a foreign virus in modern history,” he said.

Justifying the travel restrictions, he accused the EU of failing to take “the same precautions” as the US in fighting the virus.

His speech said all travel from Europe would be suspended but a presidential proclamation later said it would only apply to anyone who had been in the EU’s Schengen border-free area in the 14 days before their arrival in the US.

Mr Trump also said the suspension would also apply to cargo coming from Europe into the US. He later tweeted to say that trade would “in no way be affected”. 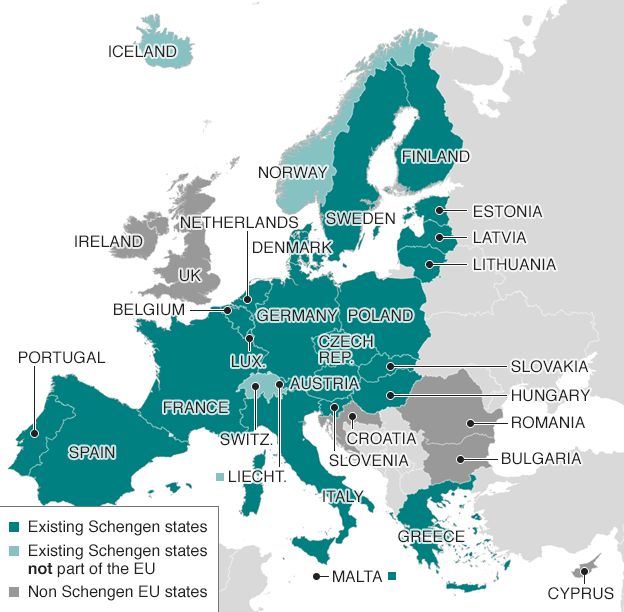 The speech included plans to provide billions of dollars in loans to small businesses and the president urged Congress to free up more funds.

President Trump said for most Americans the risk was “very, very low” adding “no nation is more prepared or more resilient than the United States”.

Has the announcement been welcomed?

In its response the EU said the coronavirus was “a global crisis, not limited to any continent and it requires cooperation rather than unilateral action.

“The EU disapproves of the fact that the US decision to improve a travel ban was taken unilaterally and without consultation,” European Commission President Ursula Von der Leyen and European Council President Charles Michel said in a statement.

Senior Democrats said it was “alarming” that President Trump did not address a shortage of coronavirus testing kits in the US.

“The best way to help keep the American people safe and ensure their economic security is for the president to focus on fighting the spread of the coronavirus itself,” House Speaker Nancy Pelosi and Senate Minority Leader Chuck Schumer said in a statement.

On the travel ban, Lawrence Gostin, a public health expert at Georgetown University, tweeted: “most of Europe is as safe as US. This will have no impact on US … germs don’t respect borders”.

How badly has the US been hit?

Concern over the outbreak rose after a number of new cases were confirmed earlier this month.

Containment efforts have begun in earnest. Troops have been deployed to New Rochelle, just north of New York City, where one outbreak is believed to have originated.

The National Guard will deliver food to some individuals who have been told to self-isolate there.

The governor of Washington state has also banned large gatherings in several counties. The north-western state is the focal point of the outbreak in the US, accounting for 24 of at least 38 deaths across the country.

In an unprecedented move, the National Basketball Association (NBA) announced that it would suspend the season after Wednesday night’s games. The decision came after one player for the Utah Jazz tested positive for the virus.

Dr Anthony Fauci, director the National Institute of Allergy and Infectious Diseases, told Congress that the outbreak is “going to get worse”, and that depended on the ability to contain those infected.

High medical costs make the virus particularly problematic – many Americans avoid visiting their doctor because of unaffordable charges. A lack of paid sick leave is another concern, as are fears about the number of available tests.

But Vice-President Mike Pence, who is in charge of the task force co-ordinating the response to the crisis, has said that “any American can be tested, no restrictions, subject to doctor’s orders”, and that insurers had promised to offset the charges.

Russian Blogger, 35, Welcomes A Child With Her Stepson, 21, After Leaving His Dad, 45