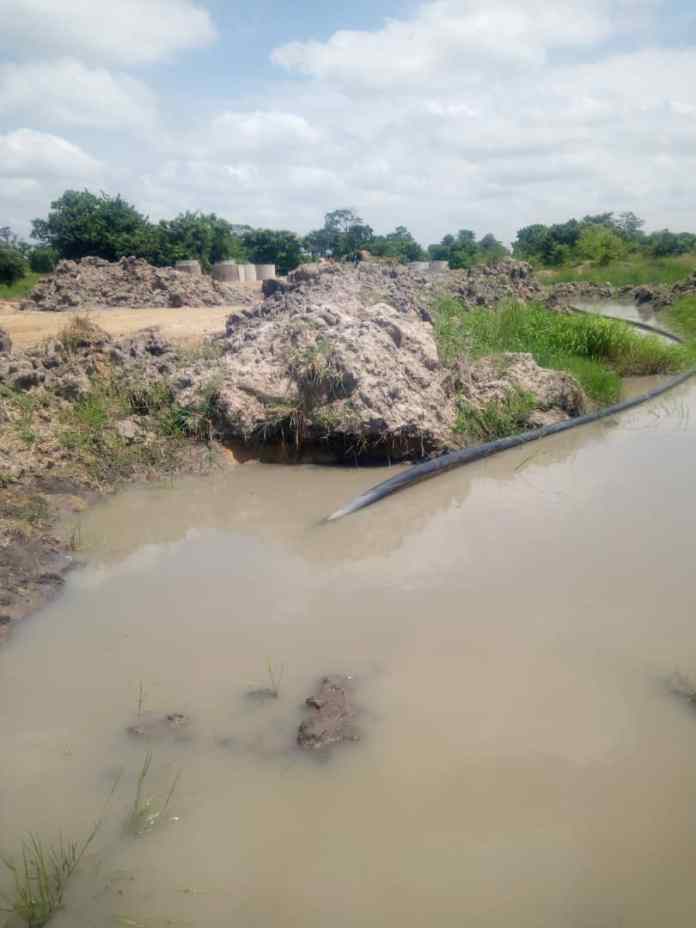 PRESIDENT Nana Addo Dankwa Akufo-Addo’s measures to fight the spread of the novel coronavirus (COVID-19) pandemic by providing Ghanaians with free potable water to drink and use some to wash their hands are being sabotaged by the contractors of the Supreme Bird Investment Construction Limited in villages on the bank of the Black Volta which meanders its way through Mepe Traditional Area in the North Tongu District of the Volta Region.

The villages are Dudevi, Atitetey, Adexorkpodzi, Adexor, Manese and Zortikpor which all fall within the Zone Three District of Water Pipeline Distribution Project in Mepe under the Mafi-Adidome river treatment water plant project in the Central Tongu District.

The residents of a population of about eighteen thousand five hundred (18,500) are blaming the contractors of the Supreme Bird Investment Construction Limited for their inability to observe the COVID -19 protocol of washing their hands with soap under a safe running water.

According to them, the District Chief Executive (DCE) of North Tongu District Assembly, Mr Richard Collins Arku and the Member of Parliament for the area, Mr Samuel Okudzeto-Ablakwa, had donated loads of Veronica buckets including liquid soaps which have been placed at various vantage points in Dodome and Adudornu Electoral Areas.

However, there residents are agitated. And their reason is that there is no water to fill the buckets to ensure that they regularly wash their hands with soap under running water.

That situation, according to them, was generally because they have been hit with a serious acute water problem, following the destruction of the main water pipeline by the construction firm.

The main pipeline, this reporter understands, was laid through the efforts of the Community Water and Sanitation Agency (CWSA) which has a river water treatment plant at Mafi-Adidome in the Central Tongu District.

The construction company which was hired by the Ghana Highways Authority (GHA) cut the main pipeline that serves the above communities following its reshaping of the road from Mafi-Adidome through Mepe-Dudevi-Adordonu linking to the Kpordoe Junction to Juapong area.

For the past four months, (from Monday April 13, 2020 to July 2020) residents of Mepe-Dudevi,Fakpui, Dadome, Hekpui, Adexorkpodzi, Adexor, Zortikpor, Manase and Atititey among others who use pipe-borne water from the river treatment plant at Mafi-Adidome have been drinking from contaminated streams, putting many of them at high risk of contracting water borne diseases.

The residents bitterly complained that their plight has been compounded following what they described as the “lackadaisical attitude and delay tactics” by officials of the North Tongu District Assembly, Central Tongu District Assembly and the Member of Parliament (MP) for North Tongu Constituency, Mr Samuel Okudzeto-Ablakwa, to impress upon the construction company to reconnect the main water pipeline from the Mafi-Adidome river treatment water plant.

Aside from the damage caused to the main water pipeline, the residents in the affected communities lamented that the construction company has also cut them off from other satellite communities where they could have trekked to fetch safe water.

They told this reporter that they had reported the matter to the District Chief Executive (DCE) of North Tongu District Assembly at Battor, Mr Collins Arku, Member of Parliament for the area, Mr Samuel Okudzeto-Ablakwa, the District Chief Executive (DCE) of Central Tongu District Assembly, Mr Moore Zonyrah, management of Ghana Highways Authority and Ministry of Roads and Highways, but all to no avail.

They noted that so far they only person who had showed some level of concern was the DCE for Central Tongu District Assembly, Mr Moore Zonyrah.

“We commend Mr Zoryrah for his leadership to help although his promise has not also come to fruition since the road linking to the affected communities in Mepe Traditional Area to Mafi-Adidome, the capital of Central Tongu District Assembly has completely been cut off by the company,” the residents stated.

The water shortage, according to residents, was draining their pockets and exposing them to possible water-borne diseases and poverty.

Even though the Volta Region is known for its abundance of water, particularly during the rainy season, this paper can report that the recent water crisis in Dudevu, Adexorkpodzi, Adudornu, Adexor, Zortikpor, Manase, Atititey, Fakpoe, Hekpoe, and Atidokpawu has become very severe to the extent that the residents find it extremely difficult to stay in these communities.

Our investigations further revealed that the people who sell water have taken advantage of the situation and were selling a gallon [Kufuor gallon] of water for GH¢4.00 to the residents.

The struggle for this essential resource was robbing residents of productive man-hours as they sometimes spend most part of the day in search of safe water for domestic use.

The three unsafe dams located at Atitetey, Domekope and Atigahkope, which were the only sources of water for a population of about 17, 500 dried up during the dry season, making residents walk 10km to Nyimor and Aklakpa rivers to access potable water.

A recent visit by this reporter to Mepe-Dudevi, Fakpoe, Hekpui, Adexorkpodzi and Atitetey revealed how most of the women hire the services of drivers of the tricycles to Aklakpa and Nyimor Rivers to draw water for them.

According to Madam Sarah Agbedzenu, she rents tricycle, popularly called ‘Motorking,’ at a cost of GH¢30.00 for every trip of water.

However, she added that if the load goes beyond the above number of gallons, she was required to pay some extra money in addition to the GH¢30.00.

“We walk to Mepe Dadome, a neighbouring community, to rent ‘Motorking. We don’t have one in our village (Mepe-Dudevi). We pay GH¢30.00 for every trip. We rent the tricycle twice a week so every week we spend more money to get water for our households,” Madam Norvise Amemanorsitor said.

Another woman, Madam Foli Akpene, lamented the health implications of sharing these sources of water with stray animals.

She said that stray animals like cattle, dogs urinate and defecate in these dams which makes their situation riskier.

She state that they wish a separate source of water could be created for the animals because this was not healthy for human consumption.

Speaking in an interview with this reporter, the Secretary in charge of Zone Three District of Water Pipeline Distribution Project under the Mafi-Adidome, who doubles as the former Assembly member for Adudornu Electoral Area, Mr David Yawli, confirmed the worrying situation and stated that the water shortage was affecting residents in both Mepe Dadome and Adordunu electoral areas.

“Our health situations are currently in danger as we are drinking water from unsafe rivers and dams,” Mr Yawli stated.

He said on Monday, April 13, 2020, the contractors of the Supreme Bird Investment Construction Limited cut off their main water pipe-borne line from Mafi Adidome while reshaping the road from Mafi-Adidome to Juapong and after the incident they invited the manager of the company and he agreed to pay for the damage.

According to him, the company brought an excavator to start digging the holes to reconnect their water pipeline and then all of a sudden the company stopped the work without giving any tangible reason.

“So when we found out from the manager why the company stopped the work, his response to us was not a friendly one at all and when we reported our problems to our MP, Samuel Okudzeto-Ablakwa, and our DCE, Mr Collins Arku, they didn’t give us any better response.

When contacted by Today on Monday, July 26, 2020, the DCE of Central Tongu District Assembly, Mr Moore Zonyrah, admitted having knowledge of the problem.

He stated that when his attention was drawn to the issue, he initiated measures to arrange for water tankers to provide potable water to the affected residents but unfortunately the vehicles could not go to the communities to distribute the water since the road was under construction and was not going through.

To this end, he called on the residents to exercise restraint, assuring them that measures were being put in place by management of Community Water and Sanitation Agency (CWSA) at Mafi-Adidome and Supreme Bird Investment Construction Limited to address the problem.

“It is not true that my colleagues, DCE Mr Collins Arku and Member of Parliament for North Tongu Constituency, Mr Samuel Okudzeto-Ablakwa, were not being caring about the water shortage problem in these communities, but l take full responsibility and assure that we will solve this matter,” Mr Moore stated.

Meanwhile, several efforts by this reporter to get both the DCE and the MP for their reactions as at the time going to press were unsuccessful.

In a rebuttal, Mr Yawli discounted the claims by the DCE that the government of Ghana has realesed the fund for the contractors of company to fix their water pipeline.

Mr Yawli described the statement of Mr Zoryrah as the factually incorrect, saying that the manager of the Supreme Bird Investment Construction Limited made him (Mr Yawli) aware that he has paid all the demage cost to the tune of GH¢10, 200.00 for the refixing of the water pipeline to the affected communities.

He explained that their credible information gathered from the new manager in charge of Community Water and Sanitation Agency of river water treatment plant at Mafi-Adidome indicates that the contractors of the company were delaying the fixing of the water pipeline because the engineers who would work on the site of “our water pipeline project were sent to do the water pipeline maintainance works at Mafi-Avedo.”