Veteran musician Samklef who has now turned himself into an Instagram blogger has called out Tunde Ednut for blocking him and Ubi Franklin after they started their Instagram channels.

Apparently, Tunde Ednut also used to be a musician but after not doing so well, he became an ‘Instagram entertainer’.

Recalling how he’s been friends with Tunde Ednut since 2007, Samklef disclosed that they were blocked by the former comedian and singer because he felt they are a threat. He added that he doesn’t believe Tunde Ednut relocated from Nigeria to the United States with his “competition mentality”.

I  believe the sky is large enough for everybody to shine. No be only one brand of moto dey this world! Jay-Z has Ace of spade, Puff Daddy has Ciroc and Rick-Ross has Belaire Rose and all of them are making money and still friends in business. I’m shocked that someone i thought was my guy’ who came to see me in my hotel’ even brought a drink and we drank together, we celebrated his new car and took photos together blocked me on Instagram 3days after, without any issues. Reasons why because he feels that I’m a threat! I have never had any issue with him since we have been friends since 2007. Nawa oh! I just can’t believe he still carry that Niaja competitive mentality enter yankee after all these years. We grow by lifting others, my guy block me’ even block ubi Franklin 2…no wahala! God dey. Aye kpo gan! 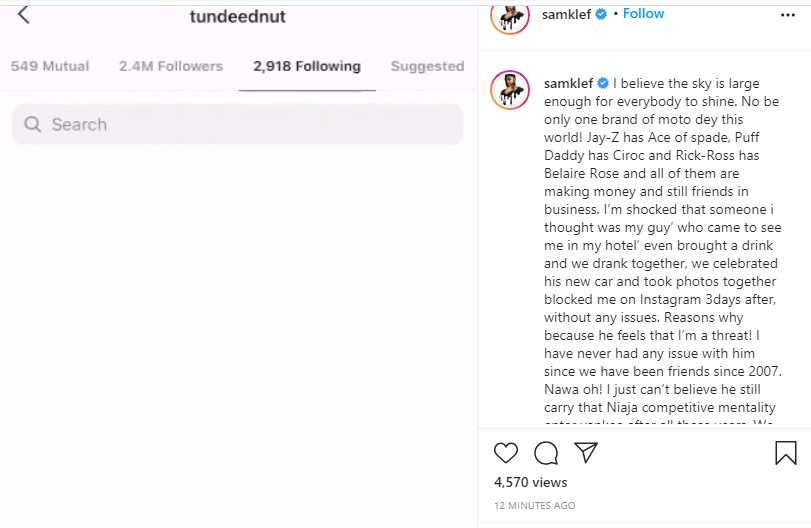 Why Xenodzi Scientific Medi-Herbs is Stored in stainless metal bottles