The ‘amateur boxer’, announced his decision to venture into boxing a week ago, after his ‘failed’ music career.

To prove to Ghanaians he is the beast he claims he is, Shatta Bandle did not settle for newbies, but agreed to fight none other than the 16-time champion. 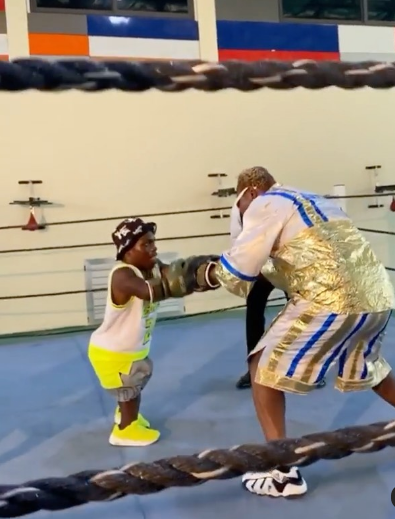 Receiving cheers and encouragement from his coaches, the diminutive Shatta Bandle charged up and gave Powers some ‘powerful’ punches.

The first round of the comic fight did not come to an end when Powers was given a knockout.

Ayitey Power’s coach, DKB, who could not handle the shame hopped onto the ring and gave his boxer more beatings than he had already received.

Regina Daniels hubby, Ned Nwoko reveals why he hides the faces of his other wives

Nigerian Lady narrates how her father used to r@pe repeatedly and threw her...