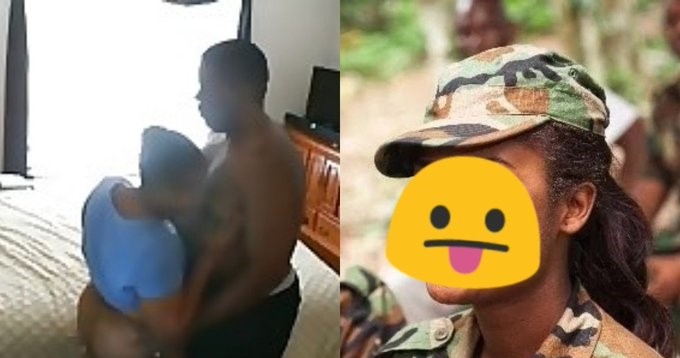 Another ‘atopa’ video is currently going viral on social media, showing a Ghanaian female military person enjoying herself while the man is busy serving her from behind.

In the video trending, the female soldier receiving a ‘ bullet’ from the back and seems to enjoy every bit of the process whiles her uniform was lying down on the bed.

From what we are told, the video which lasted a duration of one-minute eleven seconds was recorded by her boyfriend during one of their l0ve-making and promised to delete it after the action.

It went on to say that the boyfriend claimed he forgot to delete it from his phone resulting in the video leaking. It has now become the topic of discussed in various social media platforms.

According to a source who claimed anonymity, the boyfriend’s phone got spoilt and he took it to repairs.

It seems like the phone repairer decided to do more than just repairing the phone. He went through the phone, saw the video, copied it and shared it on social media.

Watch the video here below: